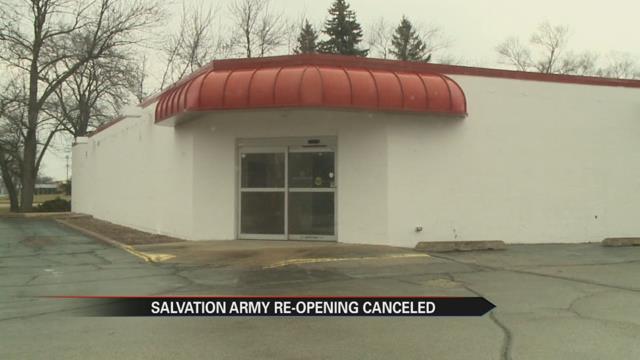 The reopening of the old Salvation Army Family Store in Niles, set for this month, has been canceled.

“Once I saw that they were gonna [reopen] it…I jumped at it,” Niles resident Ruth Rodriguez said. “I even got a girlfriend of mine to take me down there to do it with me.”

Back in November 2015, Rodriguez had her friend take her to a job fair where the Salvation Army was interviewing applicants to work at the defunct Niles store, which closed in 2008.

“I’m gonna go down there and I’m going to try and see about getting back in,” Rodriguez said, recalling what she told her husband in November.

“We were really upset, all of us [employees] were,” Rodriguez said. “All of us really enjoyed our jobs and we did everything that we could to make the store a success.”

But since the doors shut, the store has sat empty – until last November, when that job fair was held in anticipation of a December reopening.

Rodriguez applied and got hired.

“It was always, ‘You do have a job,’” Rodriguez said. “So I was really, really excited about it.”

In December, Rodriguez got a call saying the reopening was being delayed until February.

“He said that as soon as we get near to the day that we’re gonna open, we will call you, but you definitely have a job,” Rodriguez said.

But now February has arrived and no call has come – because the reopening has been canceled due to high costs.

Rodriguez said she learned her new job no longer existed when her brother told her, not the Salvation Army.

“I’m upset because they haven’t called me to tell me that they wasn’t gonna open up in the middle of February,” Rodriguez said.

But Schall said that’s not the case.

“We made every attempt to reach out to everyone that was at the job fair to let them know that the project had been delayed indefinitely, pending the securing of a new facility,” Schall said.

In the end, Rodriguez said the cancellation hurts for two reasons.

“We live on social security,” Rodriguez said. “I definitely could’ve used the income. But it was more…I’m 71. I’ve had a lot of jobs, but two of them are my favorite, and that’s at the Salvation Army Store here in Niles and Nikki’s Café in South Bend, but they’re [both] closed now.”

Schall said the defunct building is now for sale and his team is actively looking for a new location for a store in Niles, though there is no timetable for when things may happen.

For the 20, or so, people hired at November’s job fair, the wait continues.