Republicans expected to gain control of the Senate 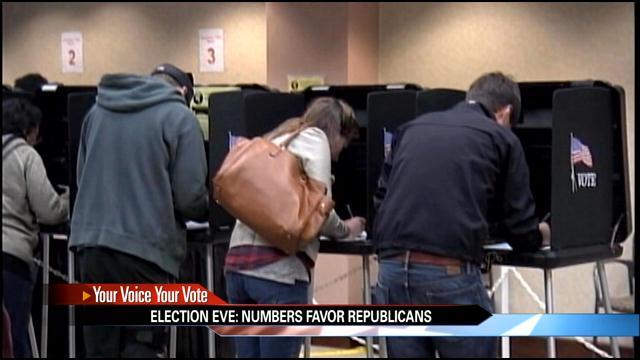 Voters across America will head to the polls on Tuesday, and pre-elections polls suggest it might be music to Republican's ears.

Candidates across the nation campaigned for one final day on Monday, and Republicans are feeling the election will sway in their favor.

“They would be bitterly disappointed if they didn't take the Senate,” says ABC News Political Director Rick Klein.

In order to take control of the Senate, Republicans need to pick up six seats. Experts say their chances are looking solid.

Three states appear to be making a switch from a Democratic candidate to a Republican.

Republicans could hit their magic number by winning just two of the 10 competitive seats now held by Democrats.

Kentucky Republican Senator Mitch McConnell is in a tight reelection battle against Alison Lundergan Grimes, however, if he wins and the Republicans pick up six seats, he will be the new Senate Majority Leader.

“We intend to be a responsible governing majority if the American people give us a chance to do that,” says Senator McConnell.

In the House, Republicans are expected to expand their majority.

“Republicans are going to think it is a vote for them, and it's not. They're still viewed negatively by the American public. And I think Democrats are going to try and isolate when it's only about this election when they still have brand problems,” says Dowd.

Several key races may not be decided Tuesday night because of slow vote counting and potential run-off elections.

Republicans may not need these states to win the Senate, but if they do, the balance of power on Capitol Hill might not be known for weeks.