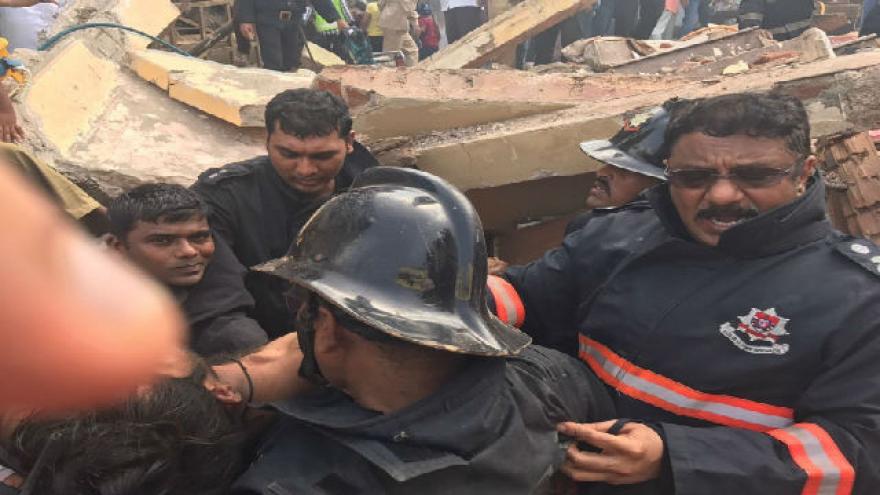 Authorities are scrambling to rescue survivors from the rubble of a three-story building that collapsed in a working-class neighborhood of Mumbai and killed at least 13 people on Thursday morning. Photo courtesy P.S. Rahangdale

(CNN) -- Rescue teams in Mumbai Friday pulled more bodies from the rubble of a three-story building that collapsed in the south of the city, taking the death toll to 33.

Among those killed when the building in Bhendi Bazaar crumbled after days of heavy monsoon rain were three children, including a baby just 20 days old.

Authorities called off the search and rescue operation Friday, saying all victims had been accounted for.

There's been no official link made between the widespread flooding and the building's collapse, however the building was 117 years old and had been deemed unsafe years ago, according to officials.

"The building was served an 'unsafe to live' notice in 2013," Mumbai police spokesperson Vijay Khabale-Patil told reporters Thursday. "Ten families used to live in the building and some of them had vacated the property recently. So we don't have an actual count of the missing people."

An official told CNN there are likely to be "hundreds" of other buildings throughout the city in a similar condition.

Sabera Rangwalla has lived next door to the collapsed building for 30 years. She told CNN she was cooking breakfast for her family of five when she heard a "loud thunder."

From her balcony, she saw a huge cloud of dust and the building fall down "like a house of cards."

Rangwalla's building has now been evacuated and police aren't letting them return, even to collect their belongings. When asked if she was worried that her home too could collapse, Rangwalla said: "New flats are too expensive and where will we go?"

Sajid Ali, a 49-year-old businessman who has run a nearby shop for 30 years, told CNN the toll could have been much higher. Children weren't due to arrive at the local kindergarten beneath the building for another hour and a half.

"They were very lucky and thank God ... God saved them, the children," Ali said.

Ali said he rushed to the building when one of his workers told him of the collapse. When he arrived he saw several dead bodies being removed as well as the injured.

Abbasshaik, a 45-year-old tailor who lives behind the collapsed building told CNN he heard a loud crumbling sound and rushed his family to safety.

They're now staying at a relative's house. He said his building hasn't been evacuated despite its proximity to the crumbled mass.

An excavator was still on the scene Friday, clearing debris and dumping it in a truck backed up to the site. Piles of rubble, twisted metal and glass sat nearby waiting to be removed.

The building collapse comes after heavy rains and flooding in Mumbai this week, which have killed at least five people.

The International Federation of Red Cross and Red Crescent Societies (IFRC) estimates that at least 1,200 have died and more than 41 million people have been affected throughout India, Nepal and Bangladesh by monsoon rains and severe flooding as of June this year. The rains are now moving northwest towards Pakistan, where more devastation is expected.

Thursday's building collapse is the second significant one to hit India's financial hub this summer. More than a dozen people were killed when a five-story building collapsed in the Ghatkopar neighborhood in July.

In May, a wall collapsed at a wedding, killing 24 people.