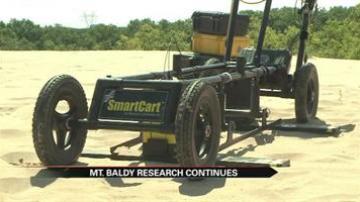 LAPORTE COUNTY, Ind. -- Researchers are closer to figuring out why the sand at Mt. Baldy swallowed up a 6-year-old boy last July. They believe the holes under the sand are caused by ancient trees - and maybe houses.

Researchers are at least a year away from their final report, but gave an update on their investigation Thursday.

They said they are looking inside the dunes to see what has been happening over the past century.

“Image the inside of the dune; very similar to the way you would do some medical imaging,” said Dr. Todd Thompson, Assistant Director of Research - Indiana Geological Survey.

Thompson says human trails, wind and waves have all pushed the dune south an average of four to six feet per year.

That means the trees and possible homes that once stood behind it are buried and rotting away.

“Leaving some form of cavity that is somewhat stable, but then for some reason becomes unstable," said Thompson.

“They searched the scientific journals, it has not to be found," said Bruce Rowe of the Indiana Dunes National Lakeshore.

Rowe says until scientists have a more detailed analysis, Mt Baldy will be closed indefinitely.

“We want to open Mount Baldy back up, but we want to know what’s going on so we can safely do that," said Rowe.

Geologists are driving rods into the ground to collect soil. They will analyze that to determine what materials they're working with.

The other research team is using ground penetrating radar to collect data on what is beneath the mound.

Together, the scientists will submit a report that will help park staff members decide how to move forward.

So far, researchers have found over sixty anomalies, including a new hole just discovered two days ago.