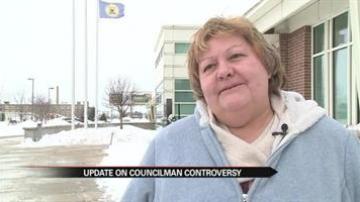 SOUTH BEND, Ind. -- The South Bend City Council's attorney sent a letter to councilman Henry Davis Jr notifying him that eight people had made formal complaints against him for the photo of a man and a dog he posted to Facebook on Sunday. And a South Bend woman filed a criminal complaint against Davis.

Davis took the photo down and apologized for posting it.

"From the phone calls I've gotten there are a lot of people who are behind this but they are afraid," said Rebecca Kaiser of South Bend.

Kaiser says she is appalled by what Henry Davis Jr posted on Facebook and she is not afraid to take action.

"As far as I'm concerned that is distribution of child pornography," said Kaiser.

"Which means anyone can look at it, a kid 12 years old can look on Facebook and type in Henry Davis and if they had done that this weekend, they would have seen something that no mother or father probably wants their child to see ," said Kaiser.

Kaiser filed a criminal complaint with the South Bend Police Department against Davis for distributing pornography to children.

Police called in some of their detectives to look into whether or not an investigation could be opened.

They say in order to file a complaint, there has to be a victim, someone under the age of 18 who saw the post and complains to the police.

Kaiser says she modified her complaint to accuse Davis of distributing pornography. She took children out of the complaint.

Police say if they do start an investigation into the matter, they will likely call in state police to handle it.