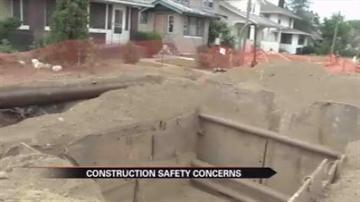 SOUTH BEND, Ind. -- Residents on Diamond Avenue in South Bend are worried there could be other holes at a construction site where a worker fell into a hole Wednesday. The worker, who was stuck for five hours, is doing well.

"Basically everything they have on the construction site is standard and follows the safety rules. I think it's just a freak accident that happened. There was a void, or a pocket of air, underneath the soil that caused the collapse,” said South Bend Councilman Tim Scott.

Residents are worried it could happen somewhere else on this street.

After Wednesday's rescue, neighbors say construction crews dumped sand into another hole that looked like it could also collapse.

"This hole was just filled in right after the young man fell in the hole because it was about a six to eight feet hole from the ground caving in,” said Becky Kaiser, resident of Diamond Avenue.

Kaiser says there are water pipes leaking by her property and that concerns her.

She wonders if there could be another hole.

"It's sand but it's not a sand box, and while it's wonderful that the kids can play in the street because there's no traffic, their parents should watch them,” said Kaiser.

Although Kaiser is worried about the erosion around other possible sinkholes, she said the construction crews have been good at alerting residents to what is going on.

"Construction crew has been wonderful. They are almost like family as far as taking care of us and telling the neighbors what's going on and addressing every problem,” said Kaiser.

We have been hoping to get some word from the city of South Bend about when the sinkhole that opened up Wednesday will be filled. We'll pass that information along as soon as we know.