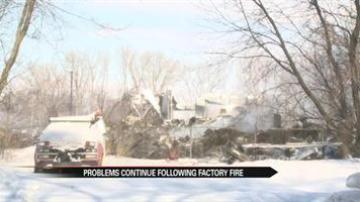 ELKHART, Ind. -- Firefighters are still battling a fire at the Lami Plastics factory - five days after the fire started. Residents nearby say they have flooded yards and no water because of the firefighting efforts.

"I answered the door, it was a police officer and he said you have to get out really quick there's a fire," said Judy Letner, who lives behind Lami Plastics.

Five days ago the Lami Plastics plant caught fire and has been burning ever since.

The smoke from the fire is so toxic, neighbors are worried for their health.

"Like melting plastic, fiberglass or whatever. It just really stinks. And a couple of times it even burned our eyes," said Letner.

Smoke is just the tip of the iceberg.

Runoff water from the plant has flooded the Letner's back yard and garage.

She says the garage is important for her husband's work.

"This garage is his pride and joy. He's got saws and everything in there," said Letner.

The backyard and garage aren't the only places that have flooded. Their well pit has flooded, which means no running water in the house.

"I went to brush my teeth and no water at all. The water just keeps seeping down into the well," said Letner.

Letner says they have tried to pump the water out of their well pit, but the runoff keeps seeping back in.

She fears the worst is yet to come with this week's prediction of extremely cold temperatures that could cause her pipes to freeze-and burst.