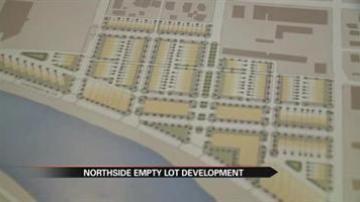 SOUTH BEND, Ind. -- The city of South Bend has 10 acres of prime riverfront real estate up for sale. In just two weeks, TRANSPO will decide on a developer for the property on Northside Boulevard. Nearby residents say that's not enough time to get input from the public.

Click here to see the three plans for the property

The leader of the Howard Park East Bank Neighborhood Association wants the city to take a little more time and educate residents about the different proposals for the property.

The ten acres of land is on the St. Joseph River on Northside Boulevard.

Residents in the Howard Park neighborhood, west of the TRANSPO property, are concerned about what will happen with the property.

Developer Dave Matthews is proposing the most urban plan of the 3 developers. It calls for outfitting the space with townhomes and condos.

Some of the people at the meeting on Wednesday said they aren't opposed to housing on the site, but they would rather see single family homes than condo units.

Schefmeyer says her fear is that the public hasn't been properly informed about all of the options on the table.

"We feel that the public needs to be informed about it, many of these things have been done in secret," said Schefmeyer.

"I think there's been plenty of information, at the last TRANSPO open meeting there were over 100 people there. People know about it, people have shown up," said Eastman.

With two weeks before the TRANSPO board's final vote, Schefmeyer says the city is running out of time.

Eastman thinks there has been enough time spent on the process.

"To me there's no need to drag this process on any longer. Anybody who has had anything to say has said it," said Eastman.

On the phone, Matthews said his plan would help integrate the northside community with the rest of South Bend by making it bike and pedestrian friendly.