Residents displaced by fires band together to consider legal action 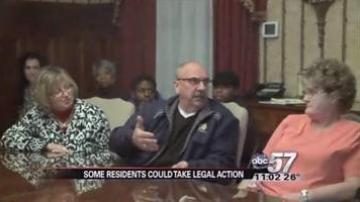 SOUTH BEND, Ind. -- Victims from the recent fires at Park Jefferson got together on Tuesday night. They are looking into taking legal action against the apartment complex.

The victims told ABC 57 News that Park Jefferson treated them poorly before, during, and after the fire. They said they don't think the apartment complex is up to standards with fire safety and now they are fighting back so it doesn’t happen to someone else.

Three weeks after flames ripped through Park Jefferson Apartments, victims of the fire are still dealing with the emotional and financial damage.

"I’m sitting here struggling to try and pick up the pieces and try to recover every little thing we can, and it's caused so many financial problems,” said former resident Veronica Rios.

Financial problems they believe are Park Jefferson's fault. 23 of the victims met up at Attorney Peter Agostino's Law Office to discuss taking legal action against the apartment complex.

The victims claim that fires are a regular occurrence at Park Jefferson and they say the complex should have taken safety precautions to prevent this last one.

"There have been two fires in the last four months since I moved in," said former resident McNair.

The victims also claimed the complex threatened them with fines if they didn't clear their burned and water damaged belongings from the apartment immediately, and when they showed up to do so, apartment managers wouldn't let them into their unit, or would make them wait outside for hours.

"For example, asking residents to sign a new lease the day after a fire -- that's unprofessional," said McNair.

Attorney Peter Agostino listened to the victim's stories of loss, fear, and sadness, then gave them some free legal advice, but he says this case won't be easy.

"It’s going to be an uphill battle," said Agostino.

He plans on representing them as a group because he says they have better chances to recover losses if they are united as a whole.

ABC 57 News tried to get Park Jefferson's side, but managers said we had to leave the property.

Last week, the complex sent out a detailed letter to tenants saying it was up to code and promised to supply each apartment with a fire extinguisher, install interconnected smoke alarms, improve firewalls, and provide residents with fire prevention training.