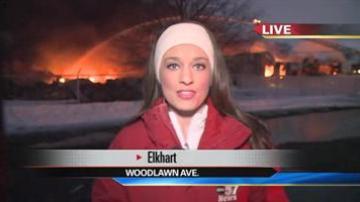 OSOLO TOWNSHIP, Ind.-- A massive fire at an Elkhart fiberglass factory is causing a wide range of problems for first responders.

The Assistant Chief of Osolo Township's Fire Department said the fire started around 2 a.m. on Sunday and they expect to be fighting the fire through Monday.

Jo Johnston said, “If you were to take a football field and put a building on it, this is about what you have as far as the size!”

The size of the fire is not the only problem. Residents who live on the south side of the fire were asked to evacuate.

One couple told ABC57 it's a miracle the fire didn't spread to their home.

The Hostetlers live just twenty feet away from the factory.

Noah Hostetler said, “I saw that the fire didn't come over to get our trees, so we felt safe because I saw that the wind was blowing southeast instead of straight south where we were."

The thick black smoke could be seen all the way from Woodlawn Avenue to Concord Mall in Elkhart.

Hostetler said, “Big billows, I mean several hundred feet wide. The smoke was moving very fast and the heat was driving it up.”

Around 11 p.m. Saturday night Osolo Township firefighters responded to an alarm at the Lami Plast, Inc. Factory. At that time, they found the roof of the building had collapsed.

There was no fire at 11 p.m., and they didn't detect a gas leak. However just three hours later they were back again, and the building was fully engulfed.

Johnston said, "Our biggest obstacle is the fact that we have a metal roof that has fallen down over all of this flammable material.”

A handful of residents were asked to evacuate and firefighters are encouraging anyone with respiratory problems to avoid the area.

Johnston said, “We’re not really concerned as far as the toxicity of the cloud that’s coming off of the burning building, but obviously there are elements in that smoke that we don’t want anybody to breathe.”

Johnston said another obstacle is the dropping temperatures. A lot of their equipment is freezing up and one hose on a Cleveland Township firetruck malfunctioned. The pressure in the truck caused the hose to pop out, and it injured two firefighters.

Johnston said, “They were taken to Elkhart General Hospital. Their injuries seemed minor and I do know for sure that at least one of those firefighters has been treated and released from the hospital.”

Indiana's Department of Emergency Management and the local health department were on scene Sunday morning testing for toxins in the environment.

Johnston said, “They’re out taking air samples right now and checking the water and seeing if there’s any contamination from the runoff into the ground.”

Construction workers were brought out Sunday afternoon to remove the roof in the midst of all the smoke so crews could get to the flammable substances under it.

The water used to fight the fire is turning to ice so the conditions are expected to get sloppy, and even more dangerous.