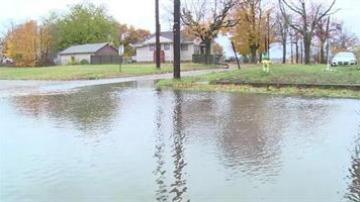 BENTON HARBOR, Mich. -- Some roads in Benton Harbor are under several inches of water. Residents say it isn't unusual after a day of steady rain.

The city says leaves, dirt and debris contribute to the flooding, but there also could be a problem with the infrastructure.

On rainy days, where Olive meets Lake Avenue, flooding gets so bad you can barely see the curb.

"That's what it appears to be, looks like a lake out there," said Kiwoa Whitfield.

Some people step off their property right into a pool of water. A pretty deep pool.

Residents say this has been going on for years - and it's getting worse. Some say the water is seeping into their basements.

"I have to go through and sweep out maybe two or three times a month just to keep the water down," said Whitfield.

Homeowners say they can't catch a break, something needs to be done.

The city says keeping storm drains clear of leaves and debris helps, but the problem may be much deeper.

Pipes and infrastructure under the roads are old.

Whitfield says whatever the problem is, he and his neighbors just want the streets fixed and the water cleared.

The city says it is in the process of applying for a grant that would bring in specialists and money from the state to help with a long term solution.