Residents fed up with people speeding through neighborhood 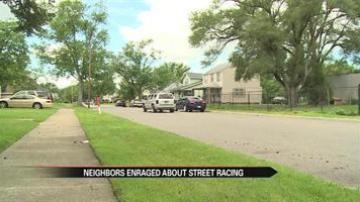 SOUTH BEND, Ind. -- Residents on Fredrickson Street have been waiting for the city of South Bend to do something about people speeding on their street. Residents say because there are no speed limit signs or stop signs, it's a dangerous situation.

"You're running a gauntlet every time you go out here to get in your car," said resident Dwayne Benac.

Benac says people race down Fredrickson like it's a highway.

"They're just totally endangering people's lives. We've had at least 12 cases where people have almost been hit, including myself," said Benac.

One of those near-accidents happened Tuesday morning.

"We had the neighbor over here she just got missed, just barely got missed," said Benac.

Benac says people speed because there are no stop signs or speed limit signs on Fredrickson.

In an hour, three cars clocked in at about 45 miles per hour.

Benac says that's three cars too many and the neighborhood needs the city's help.

"Not next month. Not next year. Now," said Benac.

The city engineer has Fredrickson on its list and the city is planning to survey the area and do a study to see if signs are warranted.