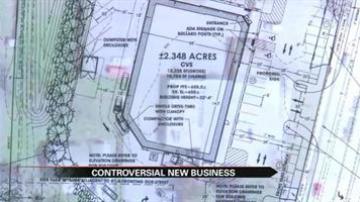 ST. JOSEPH, Mich. -- Residents on Myrtle Street in St. Joseph Michigan do not want a CVS built on their street. They say their quiet dead-end street would be ruined if a CVS is approved.

If the plan is approved, one home would be torn down to make room for the parking lot and the CVS would go where the funeral home is now.

"For some reason they want to get this done, they want to push this through real quick,' said Larry Blaylock.

The CVS would be across the street from Blaylock's home.

"I don't understand why they need this pharmacy on this location. We have 4 pharmacies within a mile radius. There are 2 independents which they'll put out of business," said Blaylock.

The owner of one of those mom and pop pharmacies less than a mile away agrees.

"I don't understand why we would need a big box store in south Saint Joe. That neighborhood behind it, people live back there because it's a hidden gem in the city and it's going to ruin the whole neighborhood," said Kelly Karsten, owner of Gillespie's Pharmacy.

"It's going to turn our neighborhood into something else. It's a commercial zone," said Rick Stobbelaar.

"We're going to be looking at a lot more traffic congestion because this is a small road, narrow road, and if you have a drive-in coming through here, an access road in and out, it's bad enough now," said Stobbelaar.

The group of homeowners against CVS is presenting its petition to the planning commission Thursday at 4:30 p.m. during the regular meeting.