Residents frustrated that crews only plow the center of the street 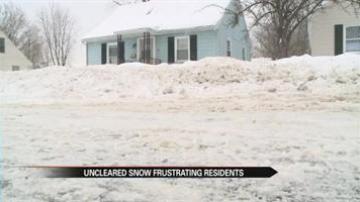 SOUTH BEND, Ind.-- One neighborhood is asking the city to plow to the curb because of all the elderly and disabled people who live on Frederickson Street.

Dwayne Benac said, “If they would have done this right the first time and went all the way to the curb, they wouldn’t have this problem. The city says they’re supposed to go curb to curb. Well there’s three feet of snow right here and the same on the other side.”

Neighbors on Frederickson Street are worried an elderly or disabled person is going to get injured trying to climb over the snow mounds.

Benac said, “Sixty to seventy-year-old people cannot be mountain goats especially when they have injuries.”

Steven Papczysi said, “It’s a real pain. It’s all bumps and grooves and everything. When a wheelchair gets stuck it’s going to tip.”

Residents said after they called the street department several times, they saw one plow truck come out.

Benac said, “He made one pass and was gone.”

One neighbor is taking it into his own hands to plow a pathway for the elderly who live on his street.

Papczysi said, "I don’t mind doing it, I just wish the city would start doing a little bit more.”

Neighbors say crews who don't plow to the curb are not only affecting residents but also special needs children.

Dona Fredericks said, “It’s upsetting when you’re driving and trying to squeeze through cars and the kids are hyper and they’ve been on the bus, and parents are calling looking for their kids and I’m trying to get through and it’s every day. Every corner I turn.”

Fredericks said she has to ask people every day to move their cars so she can get the special needs children home.

Fredericks said, “I have a kid with cerebral palsy and I have to help him climb over these mountains and it’s impossible. It’s just awful.”

ABC57 left a message with the street department however we did not hear back on Tuesday.