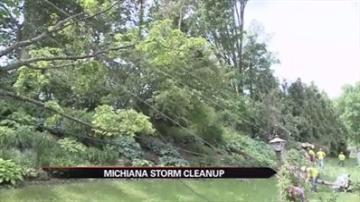 SOUTH BEND, Ind. – More than 1,000 people are still without power after the storms Tuesday night. Huge trees were knocked over and multiple utility poles were split and damaged. Some of the worst damage was evident on Woodmont Street.

Chunks of trees and power lines litter the once pristine lawns of the homes on Woodmont Street.

"It was scary just to see the dirt uprooted out of the ground when we didn't think it was-- we just thought it was a rain storm. Not anything that would rip the tree up out of the ground,” said one resident.

"We heard a loud roar and it didn't last-- it seemed like a few seconds and then we saw a big flash and that was it. The power was out and we thought that was it until we got up and started looking around and saw that our pole was down and didn't realize that the other poles were down and the tree was down too,” said Don Ullery.

Six utility poles crashed into the backyards of Don Ullery and his neighbors.

HAZMAT crews had to come in to clean up chemicals leaking from the exploded transformer.

"Didn't look too bad from the front but when we got to the back it was pretty bad. But there's not too much anybody could do. The fire department got here right away,” said Ullery.

Just down the street, Glenda Dokes and her husband have a new look to their front yard-- but they’re making the best of it.

“Free wood. Anyone want some free wood? They're more than welcome to it. We'll just have to clean up and we will be tree-less in the front yard,” said Dokes.

All of the residents say they feel fortunate no one was hurt when the trees came crashing down Tuesday night.

Indiana Michigan Power says the power should be back on in these areas around 10 p.m.