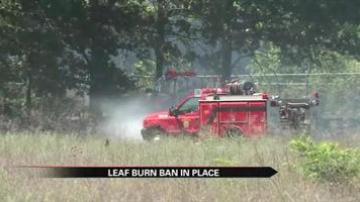 ST. JOSEPH COUNTY, Ind. -- Firefighters want residents to remember they need a permit to burn leaves, brush or anything else. The ordinance has been in effect for over a year, but firefighters say they're still having trouble getting residents to follow the rules.

Monday, a house on Sundown Road was heavily damaged by a fire after a leaf fire got out of control.

He says it is easy for a fire to get out of control, especially on a windy day.

"Any field fire is bad, but the wind is going to make it probably ten times worse," said Kazmierzak.

Firefighters are urging residents not to chance it.

If someone accidentally starts a fire and that fire spreads to another home or field, they can be liable for the damage.

"It seems like every spring and every fall, we go through this. But after the rough winter that we did have, the leaves sitting on the side of the streets all of those issues, we're just expecting a little more than normal," said Kazmierzak.

Monday crews responded to two field fires within fifteen minutes, a difficult job made ever harder when the flames burn on opposite sides of town.

"It's very dry, and if you don't have a hose or anything else nearby - or any ability to put it out - then you're just setting yourself up for failure," said Kazmierzak.

If you need of a burn permit, you can reach out to your local fire department. Firefighters will come out and inspect the area before seeking final approval from the health department.

The process usually takes about a week.