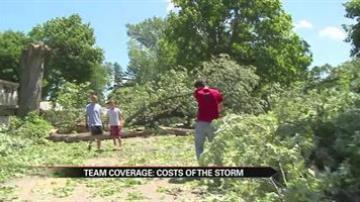 SOUTH BEND, Ind. -- When the storm ripped through Michiana early Tuesday morning, Keller Park was one of the hardest hit neighborhoods. Trees were knocked down throughout the neighborhood. Residents say they asked the city to take down some of the trees in their neighborhood a long time ago.

Many of the trees are between the sidewalk and the street - in the area called the treelawn.

The city owns the strip, but if a homeowner wants a tree removed from it, they have to pay for it.

Keller Park homeowner Bootsie Grant says the damage caused by the most recent storm was a long-time coming.

"These trees are all rotted," said Grant.

One of the trees knocked down by the storm was in bad shape.

"You can see how it's rotted inside. It stinks, its rotted. And they didn't think it was an issue, that's the bad part," said Grant.

Grant has started a petition to have the city remove all rotting trees from treelawns.

But the city says the treelawn is not their responsibility.

"It's called the devil's strip because you're doomed either way. The city owns this but you have to maintain it. They put the trees here, you have to take care of them," said Grant.

City officials say it takes a trained eye to determine whether or not a tree needs to be cut down.

Phil St Clair with the Parks and Recreation Department says when you add up the manpower and equipment, cutting down a tree can cost thousands of dollars and that money is not in the budget.

"We estimate that we have about a 120,000 or more trees in the city on a treelawn and we simply don't have the man power to go around and inspect every single tree," said St. Clair.

Grant says keller park homeowner's don't have much wiggle room in their budgets either.

"Retirement funds, social security or some kind of other assistance they are living on," said Grant.

St. Clair says caring for the treelawn is what you sign up for when you buy a house in South Bend.

"You have to look at tree care for your yard just like you would a roof or a driveway. It ages with time and there's an inherent responsibility to take care of your property when you buy it," said St Clair.

Grant says she didn't plant the tree and she shouldn't have to pay to have the city remove it.

After seeing a number of trees crash into houses and cars this week, she's worried about the damage the next storm will do.

"It's leaning towards two houses so we are worried about two people losing homes over a gust of wind or a little rain," said Grant.

The city says there are payment plans residents can set up if they want the city to cut a tree down that's on their treelawn. Payments can be as low as $25 a month.