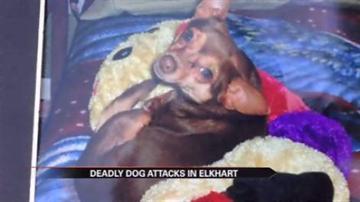 "One of the ladies said just to put alcohol on it and there's no reason to go to a vet, but obviously there was because my dog's dead," said Sandlin.

The family says its chihuahua "Chica" was attacked by a German Shephard outside a home on Wilson Street.

Sandlin's mom, Heather, filed a police report that night, but says nothing is being done.

"When the police officer came it just seemed like it wasn't going to resolved, it wasn't that big of a matter."

Word spread fast-- and two more neighbors approached her with a similar story.

"They were just watching their dog and our dog fight," said Glenda Adams, owner of attacked dog. "And then he went running and then Reilly was just screaming in the road. She didn't know what to do."

"I was attacked riding my bike with my dog," said Jennifer Lamb.

Lamb says she called 9-1-1 at the scene and saved pictures of her injuries.

The pictures show cuts on her face, fingers and bruises on her arms.

She says this is hard evidence the German Shephard is aggressive. She says now the owner needs to take responsibility.

"They don't take responsibility for it- period. I mean it's happened to three of us and it's all our fault- not their dog," said Lamb.

When ABC57 went to the owner's door, she wouldn't go on camera, but did tell us Sandlin's chihuahua was on her property. She denied the other two attacks.

But Sandlin's mom wants answers, and for animal control to finally step in, before the dog attacks again.