Residents struggling to pay to heat their homes 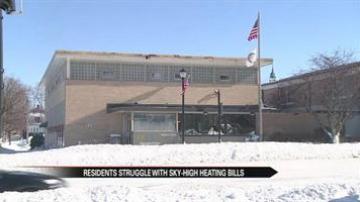 MISHAWAKA, Ind. -- When temperatures dip below zero, gas and electric bills skyrocket. On top of that, the price of electricity has gone up 14-percent in Mishawaka. Many residents, especially those on a fixed income, are struggling to pay their electric bills.

"My last month's bill was $130, and then when I saw this one, $237 I said that's incredible," said Mishawaka resident Michael Carman.

Many residents at Berkley Square Apartments are on a fixed income and are trying to figure out how they'll pay their electric bill.

"Everybody panicking about what next month is going to be like. It's going to be about double, about $400 a month. And some of these people are living off $1200 a month. They won't have any money for food," said Carman.

Carman says thanks to his part time job he can keep his heat at 68 degrees, but his neighbors aren't so lucky.

"You walk into their homes and they're sitting on the couch with a coat on and they've got their comforter wrapped around them," said Carman.

Carman says it's one thing for the city to raise rates to bring in more money but it's just wrong to be taking money from people who simply don't have it.

"People have worked 40, 50 years in their lifetime and now they're scraping pennies. You can imagine what they are going through and a lot of them are too proud to mention it," said Carman.

We called Mishawka Utilities to find out what happens if someone falls behind or can't pay their balance in full. They said residents have one month to pay the balance before their utilities are shut off.