Residents trying to stop teens from jumping off bridge 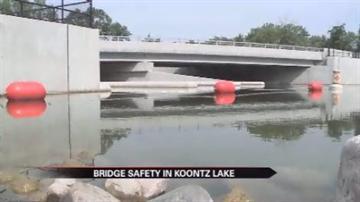 STARKE COUNTY, Ind. -- Even with a 20 foot drop, people are jumping off a bridge into Koontz Lake for fun. Bridge jumping has become a popular activity at the Starke County lake, but nearby residents are trying to put a stop to it because they fear someone is going to get seriously hurt.

In recent weeks Joe Reed and other residents nearby have noticed teens jumping off a bridge into Koontz Lake.

"It's all fun until somebody gets hurt," said Reed.

He's worried someone could fall, hit their head on cement below and possibly drown.

Or someone standing on the bridge could get hit by a car. The bridge is a busy road with a curve, so visibility is limited.

Despite the safety concerns, there's no ordinance banning the practice.

The bridge is owned by the state, so highways officials can't put up a warning sign until county commissioners outlaw it.

"It hasn't been dealt with. You don't deal with it until you know there's a problem," said Reed.

The last few weeks of summer are expected to bring in big crowds, so the chances for an accident are all the more likely.