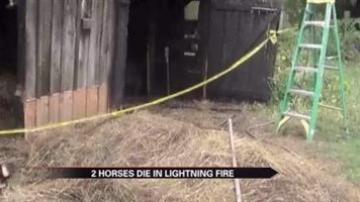 RHODE ISLAND — A family in Rhode Island lost two horses after the barn caught fire after being struck by lightning early Sunday morning.

The owner says she was awake and could hear it storming outside.

She said she thought she could rescue the animals.

"Was standing in the bathroom and I heard like a pop and so right away I looked out to see if I could see anything and I thought I had seen an orange glow," said Vicki Burnette.