Rick Perry: I regret calling for end of the Energy Department 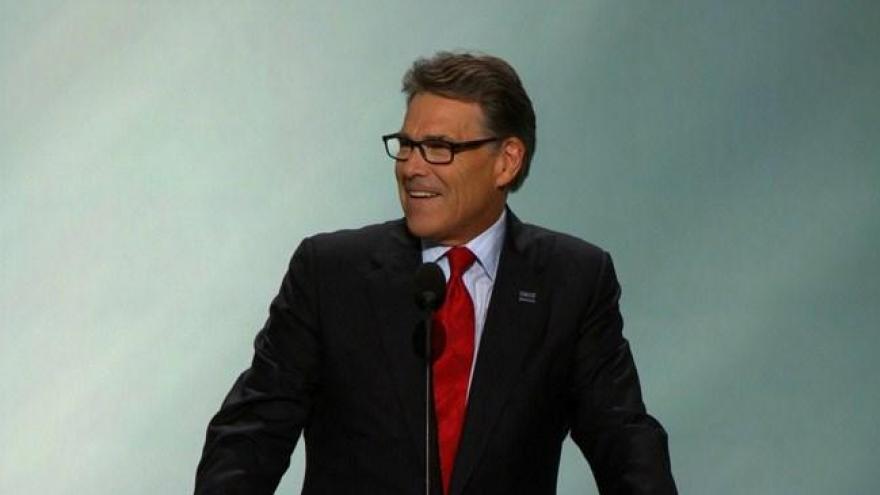 WASHINGTON (CNN) -- Rick Perry once famously forgot that the Energy Department was on the list of government agencies he would like to shut down. On Thursday, Perry asked a group of senators for their approval to lead the organization, stating that he regrets calling for the agency's elimination.

Perry, most known for serving as governor of Texas for 15 years and running for president in 2012 and 2016, cast himself as an advocate for a range of energy sources while testifying before the Senate Committee on Energy and Natural Resources, noting that he presided over the nation's leading energy producing state.

His admission that he regrets his past comments about the Energy Department signals he's looking to move on, especially when, on a debate stage in 2012, he forgot that the department was among three that he had called to close.

But Democrats were not prepared to let him do that.

"Congratulations on you nomination. In case you have may forgotten, you once called for the abolishment of hits agency," Sen. Maria Cantwell of Washington, the committee's top Democrat, said in her opening statement. "I suspect now, having a chance to learn about the importance of this department, you have a very different opinion."

Perry leaned heavily on his time as governor of Texas, the largest energy producing state in the country.

"From this experience, I learned how important energy is to the American economy, and the great responsibility we have to take care of what we've been given and to protect our citizens," Perry will say. "If I am so fortunate as to be confirmed, this experience will inform my priorities at the department."

Perry, a seasoned professional at fielding questions due to his time in the presidential spotlight, will likely field questions about nuclear security, climate change and energy jobs from the senators who will question him on Thursday.

The bulk of senators on the committee come from Western energy producing states -- for example, Lisa Murkowski of Alaska is the Republican chair of the committee and Cantwell of Washington is the top Democrat -- so Perry heads into the hearing expecting to be pushed on how he will boost energy production, while balancing environmental concerns.

There are also likely to be flashpoint regarding climate change. Bernie Sanders, the liberal senator from Vermont, made climate change a key aspect of his 2016 presidential campaign and slammed Scott Pruitt, President-elect Donald Trump's pick to lead the Environmental Protection Agency, on Wednesday for saying the human impact on climate change needed more research. Sanders will likely be joined in that line of questioning by Al Franken of Minnesota and Martin Heinrich of New Mexico.

Perry said Thursday that he believes the "climate is changing" and that "some of it is naturally occurring, but some of it is also caused by man made activity."

"The question is, how do we address it in a thoughtful way that doesn't compromise economic growth?" Perry said, adding later that he is "committed to making decisions based on sound science and that also take into account the economic impact."

Cantwell told Perry before his opening statement that she was "deeply concerned about the things you have said about climate science."

The former Texas governor also said that, if confirmed, he will "advocate and promote American energy in all forms, and that includes renewables."

"America has been blessed with vast natural resources and the technology to utilize them," Perry will say. "I am committed to helping provide stable, reliable, affordable, and secure sources of American energy. An American first energy strategy is important to create jobs and grow the economy."

If confirmed, Perry will take over Ernest Moniz, a nuclear physicist who has lead the department since 2013.

Democratic aides on the committee have told CNN that they are not concerned with Perry's lack of scientific experience, noting that the role of energy secretary has not always gone to a scientist.

"If you look historically, Steven Chu and Ernie Moniz are the anomaly," said an aide to the committee. "Perry is almost more the norm, Moniz is more the exception to the rule."

Perry said he is committed to "maintaining American leadership in the area of scientific inquiry" and thanked Moniz for speaking with him about the job a number of times.

Like most of Trump's nominees, Perry is likely to be confirmed. Republicans control both sides of Capitol Hill, meaning even if Democrats object -- which is unlikely to happen en masse for Perry -- there power to stop his appointment is limited.