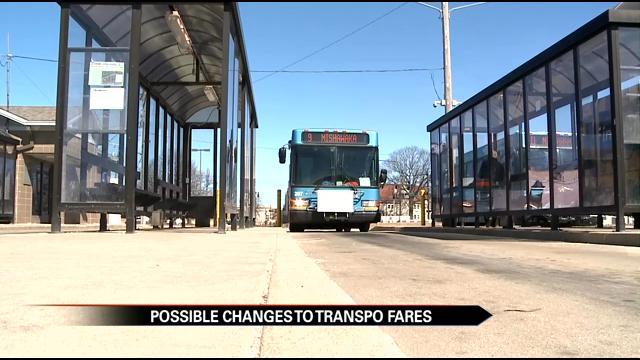 Some bus riders could soon pay less for their daily commute.

The South Bend Public Transportation Corporation is proposing changes in its fares and wants your feedback.

“[I spend] about $35 a month, I think it's a little bit expensive,” said rider Zach Timberlake.

Bus riders in Mishawaka say their daily expense on travel is too pricey, but they rely on public transportation for convenience.

“I take the bus a lot,” said Timberlake. “Everywhere I go I'm on the bus, constantly going to appointments and counseling.”

Now Transpo officials are looking to give riders a break.

“It would be good for me because I'm trying to find a job right now so I be going back and forth filling out applications all day,” said Dylan Griffin.

Griffin says while looking for a job his fares are starting to add up.

Tuesday, Transpo will hold one of two public meetings proposing changes to its fare structure.

For a while, some riders believed the fare card system didn't actually save them money.

In fact, buying a 2 ride card is the same as paying out-of-pocket for each trip.

Transpo is looking to get rid of the current two-ride pass and replace it with an unlimited day pass for a dollar more.

A change many customers believe would attract even more riders.

“I think it's going to bring more people to ride the bus since they can spend $3 and ride the bus all day instead of spending a dollar, after a dollar, and a dollar,” Griffin said. “That can be really expensive.”

The second meeting will be held Monday, March 23 at the Transpo Administration offices?.