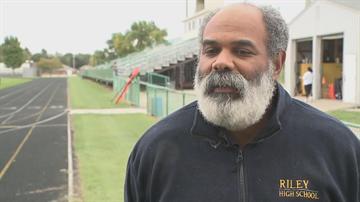 SOUTH BEND, Ind. – Riley High School Athletic Director Walter Ballard was put on paid leave on Thursday.  South Bend School Corporation officials wouldn’t comment as to why Ballard was put on leave, only saying that it is a “personnel issue.”  However, a source in the school administration told ABC57 that Ballard was escorted out of the school on Wednesday and that he is under investigation for an inappropriate relationship.  Ballard denied the allegations when approached for comment.

“My past dealings with individuals speak to themselves,” Ballard said.  “I have not been contacted as to the specific charges that have forced me on administrative leave.”

Ballard’s leave came on the heels of Riley Principal Ed Bradford, who was put on leave in September and then retired earlier this month.  South Bend School Corporation also described Bradford’s leave as a “personnel issue” and wouldn’t comment on why he was put on leave.  Parents at Riley said they’d like more details about the reasons for Bradford and Ballard’s leave.

"I just wish the school would be a little more informative with the parents and the students," explained Pat Meller, grandparent of a Riley student.  "I'm concerned.  I think all the parents are going to be when they find out."

Others are concerned about not getting enough information and worried about the nature of the alleged “inappropriate relationship.”

"What could it be? I hope it wasn't a student, I hope it's nothing to do with a student," said Carla Wawrzyniak, parent of a Riley student.  “It worries me; you never know what’s happening now at school, it worries me a lot.”

Ballard wouldn’t comment on an inappropriate relationship, but maintained that he has never harmed a student.

“Please get to the truth of this, this is so wrong,” Ballard said.

South Bend School Corporation officials explained that Ballard is on paid leave for “an indefinite period of time.”