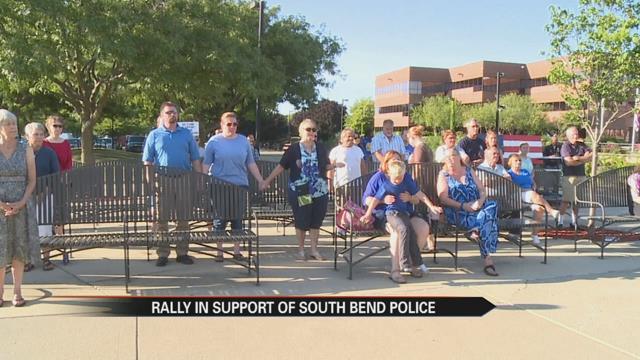 Violence across the country has prompted locals to join and show support to our local men in blue.

The community hosted an Officer Support Gathering in Seitz Park on Monday night and the River Lights were changed to blue.

It was a gesture that means a lot to Captain Steven Noonan of the South Bend Police Department.

“It means a lot to the police officers because the community is showing they care,” said Captain Noonan.

His daughters Erin and Bridget say being the children of an officer is a lot scarier now than it used to be. With dozens lighting candles, holding hands, and standing by their father they say seeing that community support is a big deal.

“It’s uplifting to see everyone come together and just kind of band together and you know, go against the violence that’s happening all over the world,” said Erin.

The Noonan girls stood by their father’s side as he read allowed the names of the fallen officers in Baton Rouge, Dallas, and Berrien County.

“There is and can be no justification for the cold blooded murders that took place of police officers around the United States. We should not have to wait for a moment like this to acknowledge the risks and the sacrifices that not only our officers, but anybody who holds them dear makes, even on the best day simply by putting on that uniform,” said Mayor Buttigieg.

“ “They are what makes South Bend-- South Bend. As much as every single one of us that is here. They are a part of our community, and we are a part of their community and we honor them and want to make sure that tomorrow morning our policeman get up and get to do it all over again,” said activist Becky Kaiser.

It's that communication and understanding for each other the Noonan girls are hoping will keep their dad safe.

"There's plenty of sides to the argument. So I wish people would just be a little bit more compassionate and a little bit more understanding rather than just you know 'I'm on this side and that's where I'm going to stay',” said Erin.