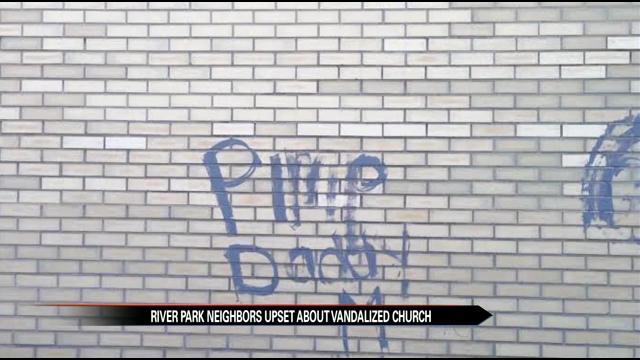 The names “pimp daddy” and “Andy” were spray painted in large letters on the side of the church.

David Ward rides his bike down Mishawaka Avenue every day and he said this latest act of vandalism crosses the line.

“It's terrible when anyone does vandalism. Especially to a church,” Ward said.

Neighbors described the church as a staple in the community –undeserving of this treatment.

“Very active in the community has a lot of activities going on. I said its just ridiculous, these are people who don't know what to do with their time,” Margaret Whitmer explained.

“I feel bad for the church having to waste extra money that could be helping other people out in the community,”  said Kimdra Richardson.

Photos of the vandalism sparked outrage on Facebook as well. Several blamed unsupervised teenagers for the crime.

Other neighbors had other theories.

“I'm not sure it's local people. I think it's people coming in. And they're just too dumb to think of something better to do,” Whitmer said.

Police are investigating the matter.

“I just hope people think about what they do before they do things because it affects everyone in some kind of way,” Ward said.

As for the cleanup, the pastor said church trustees will soon get to work removing the vandalism. They thank the community for support.
Share this article: