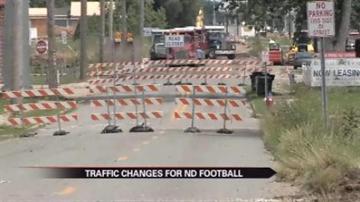 SOUTH BEND, Ind. -- In just three weeks tens of thousands of people will descend upon Notre Dame, to cheer for the Fighting Irish. Many of them will have to battle road construction to do it.

"The city, county police, Notre Dame Police, state police, are all involved and they're still putting together exactly how we want to try to put traffic patterns in place," said Dennis Brown Spokesman for the University of Notre Dame.

It used to be easy.

"For decades we had essentially the same existing roads, streets, and pattern," said Captain Phil Trent of the South Bend Police Department.

That pattern is out the window this year because of construction.

Police say you will want to look at the new traffic flow map before heading to campus.

"Don't think you're going to be able to do what you always did. Even if you believe you are familiar with South Bend," said Trent.

Even your trusty GPS won't help this year.

"The roadways have changed so much, so fast that the mapping is probably not going to come close to catching up. We're essentially going to tell people turn you GPS off and use the old fashioned method," said Trent.

That involves printing off a map or following directions provided online.

The maps aren't ready - just yet.

"We'll be making an announcement probably a week or 10 days from now," said Brown.