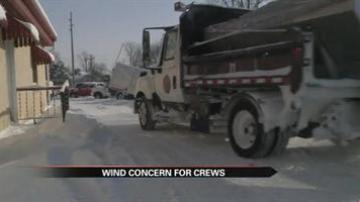 Even though the snow has stopped, it will be a while before roads are back to normal.

"We've been running 9-12 guys pretty much non-stop around the clock," said Tim Ryan of the Mishawaka Street Department.

Ryan says it has been difficult to keep up - not with the snow, but with the cold weather. When the air is this cold, the city's trucks have a hard time keeping up.

"The cold really takes its toll on the metals. The colder it gets, the more brittle it gets, and things are going to break," said Ryan.

At the street department garage, mechanics were making repairs to get the trucks and workers back on the roads.

Even then, all the trucks can do is plow the 150 miles of roads in the city.

"Our salt -- even though it's treated, it'll only work down to about 5, 6 below zero. Somewhere in there.

Sometimes ten, but with your wind chills getting in the 40s, 35 below -- we're not even using it," said Ryan.

Crews said their main focus has been clearing the main roads, but they are now able to give attention to the side roads.

You can do your part to help by not shoveling snow into the road and park your car in your driveway if possible.