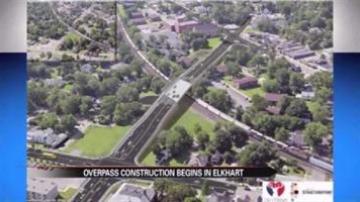 ELKHART, Ind. -- There are new road closures in Elkhart as the city prepares to build the Prairie Overpass. Main Street is closed between Indiana Avenue and Willard Street and won’t reopen to drivers until December 1st.

On Tuesday, a train blocked traffic for more than a half hour on Main Street, and caused frustration for drivers.

The Prairie Overpass is expected to eliminate traffic delays because of trains.

“We did a study when we were first starting to work on the project. We set up a video, a time lapse video, and it was closed for eight hours a day,” said Elkhart City Right Of Way Engineer Leslie Biek.

Biek says the overpass will prevent traffic from being distrupted when trains go through.

“This overpass is very important for the city. It’s connecting the north and south sides of Elkhart that are currently cut off 8 hours a day by trains. It will eliminate the conflict between trains and vehicles or pedestrians,” Biek said.

Before construction can begin crews must do utility work on nearby roads and demolish fourteen buildings.

The manager at the Marathon Gas station on Main Street says the utility work is blocking his business.

He worries six more months of this could have a huge impact on sales.

“Like right now it’s only been two days that they closed the roads. But we can easily see how bad it’s impacting on our business,” Baljinder said.

The $10 million project is being paid for with federal and city funds. Detours have been set up as crews prepare to build the overpass.

Construction of the overpass won’t begin until next year.