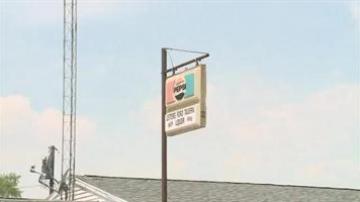 It was a typical Memorial Day weekend for Cheri Coleman and her son, Tony.

They went on a long motorcycle ride, then went to listen to live music at the Leiters Ford Tavern.

“First time I had my motorcycle out for the summer. It was the first time I went riding with Tony this summer. We had a good ride before that and everybody was having a good time there,” said Cheri.

Just before 2 a.m., Cheri and her son started to leave the bar.

“I just saw the arm come around. And Tony hit the floor,” Cheri said. “The doctor told me when I got to the hospital that his heart stopped instantly, so I’m guessing he died when he hit the floor."

She says Clark was passed out in the bar until he stumbled past them on the way out, and threw the punch.

Now Cheri wants to know why the bartender didn't kick Clark out, or stop serving him drinks.

“I bartend for a living. You don’t let somebody sit in the bar passed out for three hours. You don’t serve them drunk,” Cheri said.

And now Cheri says she has to live with the memory of watching her son get killed in a matter of seconds, something Tony never even saw coming.

His family, his sister, and his son say he will be missed.

“If anybody needed anybody to talk to, he was just a great guy and a great friend. And a great son and maybe an ornery brother,” Cheri said.

Cheri said she doesn't believe those preliminary charges of aggravated battery will be enough to serve justice to the man who took her son's life.

We reached out to the Fulton County Prosecutor to ask about further charges, but have not yet heard back.

ISP's lead investigator on the case says the prosecutor is still in the process of reviewing those charges as of Wednesday afternoon.