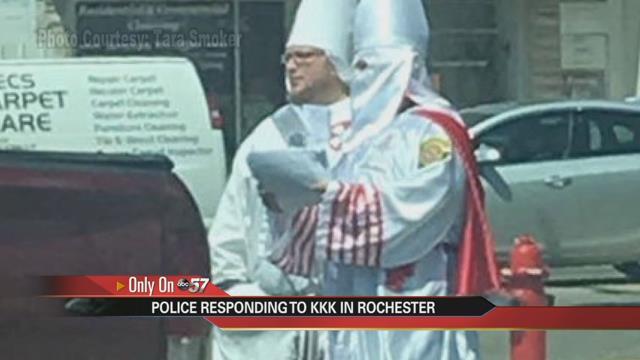 Men in white pointed hoods are rarely seen in Rochester.

Saturday afternoon however, three men in robes passing out KKK paraphernalia were outside of the Fulton County Courthouse.

Now, the community is searching for answers, and wondering why their town was chosen.

One mixed race couple says it deeply disturbed them.

Larry Fields Books says he gave the men the benefit of the doubt and asked for a flier.

Larry and his wife, Marlena Books, have a daughter together.

They say after the three hooded men showed up, she started asking questions she never had before.

"She even said, 'can we just tell them I'm white so they won't hate me?'" Marlena said of her daughter.

The Books and others in the community refused to be afraid.

"Rochester is not a racist community," Larry said.

Numerous Facebook users agree, based on their comments on Marlena's of video the men.

Many also wondered why they weren't kicked out of town.

"We have a city ordinance in place. they're allowed on the city streets and can speak to pedestrians," Sgt. Matthew Hipsher said.

Hipsher says even if police and the public don't agree with the cause, they can't stop groups from exercising their rights in public.

But they aren't allowed to disrupt traffic, and once the men started to , that's when police say they headed over.

"I proceeded to the areas and they had already left prior to my arrival," Hipsher said.

Police still recommend if people see something that bothers them in town, to give them a call.

The First Amendment rights that protect hate groups, also protect everyone else, like another family who held up "Go Home KKK," signs.

"It's a good feeling to know you have a community that's going to stick together and be strong," Larry said.