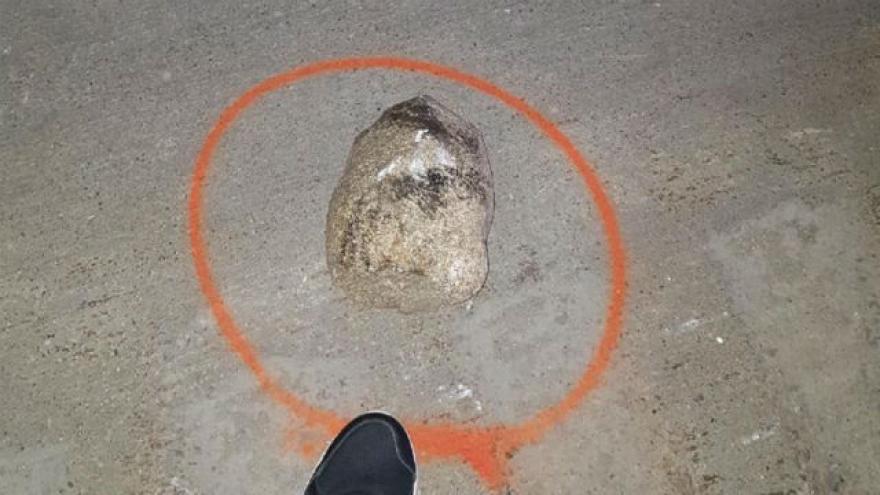 Police say this rock was thrown off an overpass in Michigan on October 18, 2017. Photo courtesy Genesee County Sheriff\'s Office

(CNN) -- Five teenagers from Michigan have been charged with second-degree murder after being accused of throwing a rock off an overpass that killed a man, according to the Genesee County Sheriff's Office.

Kenneth White, 32, was a passenger in a van that was traveling along I-75 near Flint, Michigan, on the night of October 18, when a 6-pound rock smashed through the windshield of the vehicle, fatally injuring him.

White was struck in the face and head, and the rock ricocheted to his chest, causing him to lose consciousness, according to Genesee County Sheriff Robert Pickell.

The driver told police he had to pass four other vehicles, which were disabled on the side of the road because of rocks, before he could pull over to get help for his friend.

Pickell and David Leyton, the county prosecutor, announced on Monday that the teens, ages 15-17, are being charged as adults with one count of second-degree murder each. They are also being charged with conspiracy to commit murder, six felony counts each of malicious destruction of property and two other lesser charges.

"It's not a prank, it's second-degree murder," said Pickell. "I don't think anybody is laughing and I think that if there's any warning that both David and I can give, is telling young people, you make a bad decision, you could be spending the rest of your life in prison."

Police said the group threw a tire and about 20 rocks, one weighing 20 pounds, off two overpasses that night, damaging several vehicles. After throwing the rock that killed White, the teens left the overpass and went to a McDonalds to eat.

"To propel the size of boulder down from the Dodge Road overpass to a 70 mph vehicle that's headed southbound, you ought to know -- a reasonable person would know -- that that is creating a high risk of great bodily harm, or in this case, death," said Leyton.

The teens will be formally arraigned in court on Tuesday.

"At the end of the day nobody wins. The young people are charged criminally, a young boy lost his father and all of the families are left grieving," said Pickell.