Roger Parent resigns from school board 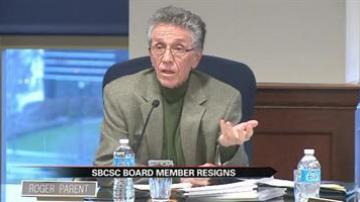 SOUTH BEND, Ind. -- Roger Parent has submitted his resignation to the South Bend School Board. In his resignation letter, he said he felt he could no longer be productive on the board.

"I find that prevailing circumstance have made it impossible for me to be productive as a trustee on important challenges facing the district. Since, as a matter of principle, I don't stay on a board unless I can make a significant difference, I'm obliged to resign," wrote Parent in his resignation letter.

Other board members say they understand his frustration.

“He’s frustrated and I don’t blame him. I’ve been contemplating resigning myself," said William Sniadecki, a member of the South Bend School Board.

Sniadecki has been on the board for 10 years and sometimes he thinks he can't do the job he wants to anymore, either.

“It’s been all political,” said Sniadecki.

Parents also have an opinion on Parent leaving.

“He’s been there for so long and putting up with everything. You know, he probably stuck it out longer than I could," said Mark Perkins of South Bend.

Perkins has a special needs son in South Bend schools and has a long family history with the corporation.

Both he and his in-law's served time on the South Bend school board.

What does he think about the job Parent has done?

“There’s been good and bad," said Perkins. "I think Roger has done a fantastic job over the years. I haven’t agreed with everything that he stood for but for the most part, I think he did a real fine job.”

Sometimes Sniadecki was Parent's biggest critic, but he says they both wanted the same thing in the end.

He believes Parent is leaving too soon, though.

“I think Mr. Parent is making a mistake by resigning right now," said Sniadecki. "I understand how he feels because I feel the same way. But hopefully the people out there will see what’s happening and make a difference.”

Parent has been on the board for 5 years.