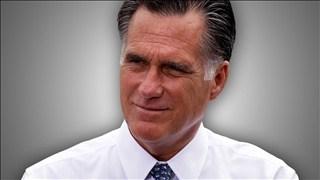 Former Massachusetts Gov. Mitt Romney acknowledged Friday that he is once again considering running for the Republican presidential nomination,declaring that the country is in worse shape on both the domestic and foreign fronts since President Barack Obama took office.

"I'm giving some serious consideration to the future," Romney said in remarks to members of the Republican National Committee. "But this I know, we can win in 2016 as a party in the House, in the Senate, and in the White House if we communicate a clear vision of where we are taking this country."

Romney did not discuss specific details about his time frame or steps he would take in considering another run, but the 2012 GOP presidential nominee did note that his wife, Ann, was supportive of another presidential bid.

"Now, I should tell you the last few days the most frequently asked question I get is 'what does Ann think about all this,'" he said. "She believes that people get better with experience. Heaven knows I have experience running for president."

News of Romney's sudden interest in running for president again, became the topic of discussion at the RNC Winter Meeting this week, overshadowing other major news including the announcement of dates for the 2016 Republican National Convention and the unveiling of a presidential primary debate schedule.

"I think that he has been the dominant talk here," said Saul Anuzis, a former chairman and national committeeman from Michigan. "Most people were surprised. He is very well respected and liked here, but he has got to make a case for running a third time. And especially when we have such a strong field. When you take look at this ... I don't think ever in history we have had such a strong field of candidates."

A "strong field" is one of the major obstacles facing Romney if he chooses to run again as well as calls for a fresh face for the GOP to put forward as the party nominee. Wisconsin Gov. Scott Walker, who is seriously considering running for president himself, emphasized that point several times Thursday night during his speech at the RNC.

Maryland GOP Chair Diana Waterman said that people were "intrigued" by Romney's decision to consider another run, but noted Republican voters will be sizing up the full field of candidates before making a decision.

"The bottom line is we want to choose a candidate that we're going to take all the way to the White House," she said. "I am not sure who that is going to be yet."

Even in New Hampshire, arguably Romney's strongest state of support outside of Utah, he would have to campaign hard to convince voters to give him another chance, said Jennifer Horn, chair of the New Hampshire Republican Party.

"Obviously, Mitt comes into New Hampshire with a certain advantage, but all of the candidates have advantages and challenges they have to overcome," she said. "Gov. Romney has a strong base of loyal supporters in our state, but at the same time, he is going to have to set up an operation and win the votes one at a time just like everyone else. It is not a gimme for anybody."

In his speech Friday, Romney highlighted "three principles" that he thinks the GOP should emphasize heading into the next election: Making the world safer, increasing opportunity and lifting people out of poverty.

It was in his pitch on national security that Romney not only hit the current president. He aimed his attack at a possible future opponent in 2016: former Secretary of State Hillary Clinton.

"The results of the Hillary Clinton-Barack Obama foreign policy have been devastating and you know that," Romney said at the San Diego gathering, citing terrorism in France, Nigeria and Yemen as examples of how policies from Obama and Clinton haven't worked to make America safer.

It's been a busy week for the former 2012 Republican nominee, who is suddenly leaning in for a 2016 presidential run. Romney spent the past week phoning donors, former staffers and political backers, letting them know he was seriously thinking about entering the 2016 fray of Republican hopefuls.

The gathering in Southern California has been a steady spotlight for prospective 2016 GOP presidential candidates such as as Walker, Dr. Ben Carson and Texas Gov. Rick Perry. Each delivered speeches to the state party leaders and activists.

By Mark Preston and Jeremy Diamond
Share this article: