Romney takes center stage in final night of the RNC 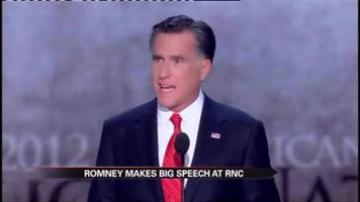 In his nomination acceptance speech he focused on his values and what he is calling his vision for how to lead America back to prosperity.

He also said that President Obama does not deserve a second term.

There was also a mystery guest speaker for the final night of the RNC.

Legendary actor and director Clint Eastwood got a few laughs for interviewing an "invisible" President Obama.