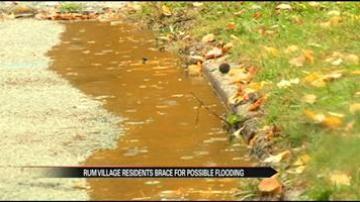 SOUTH BEND, Ind. -- The South Bend Common Council approved next year's budget Wednesday evening. The approval means wells will be installed near Rum Village to keep water out of the basements of nearby homes.

Three trucks worked in unison sucking up the leaves that could clog the sewers and leave homeowners wading in water.

"We had severe flooding probably about a couple months ago when we had that four to five inches of rain in the space of like an hour and a half," said Lois Stiffler.

"This area is known to flood in a good rain," said Yoder.

Wednesday night the 2014 budget was approved meaning there will be money available to install equipment to pump the water away.

Wells will be installed as extra relief for homeowners who experienced increased flooding with the closing of the ethanol plant.

"We are east of Rum Village, it's on the other side of 933, and it seems as if everything kind of runs downhill from Rum Village," said Stiffler.

The mayor's office says it is still breaking down the numbers but the money to install those wells will come out of the larger $11.4 million smart streets initiative.

Homeowners say they're thrilled since a plan to help is finally down on paper.

"Probably more surprised than excited. Naturally they're going to be excited but it's been a battle," said Yoder.

Even to the east of the notoriously flooded Rum Village-these homeowners say they've been battling the flooding just as much.

Hopefully the wells will fix a longstanding problem.

"When they closed the ethanol plant everyone had issues, so we're all connected, and what affects one person and one city block, can affect somebody else," said Stiffler.

The mayor's office said that that ethanol plant, recently bought by New Americas Corporation, will likely start producing ethanol again by the first of the year.