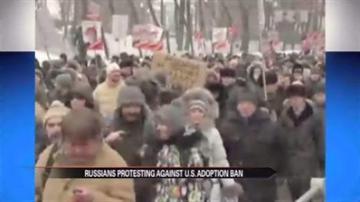 MOSCOW -- Russian protestors marched against the new law that bans adoption of Russian children by US families.

Nearly 10 thousand people took part in the protest. Demonstrators carried portraits of the deputies who voted for the law and at least nine activists were arrested.

This law is Russia's response to the U.S. black-listing Russian officials involved in the death of an anti-corruption lawyer.