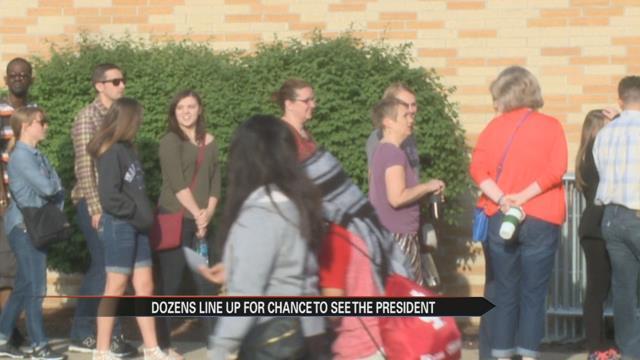 On Tuesday Elkhart County got ready for the President of the United States.

“I got here at 6 o’clock,” says Lawrence Ward of Elkhart who was number 19 in line.

People of all different walks of life hoped to get tickets to see President Barack Obama address Elkhart County on Wednesday morning.

“Of all the places in the United States he is coming here so close to us,” says Marcela Sanchez, of Elkhart.

This is the second visit the President makes to the RV capital of the world and for one Forest River employee President Obama’s visit is personal.

“It went from not being able to do anything to being totally wide open like it is right now and that’s due to president Obama and bless his heart for that,” says Andrew Repaich, Elkhart Resident

Repaich got emotional thinking about the hard times of 2008.
He never lost his job but felt the recession.

Repaich was at Concord High School the first time the President visited in 2009.

“At that time he said I’m going to make it better, and he did that,” says Repaich.

Repaich is a strong believer that President Obama’s financial policies helped turn around the RV industry.

“Ya know that’s all due to president Obama if he wouldn’t have done that the county would have been in a lot of trouble,” says Repaich

Holding two tickets in his hands, Repaich says the wait was worth it.

“Ya know it isn’t every day you can see the president in Elkhart Indiana and I’m cool with that,” says Repaich.