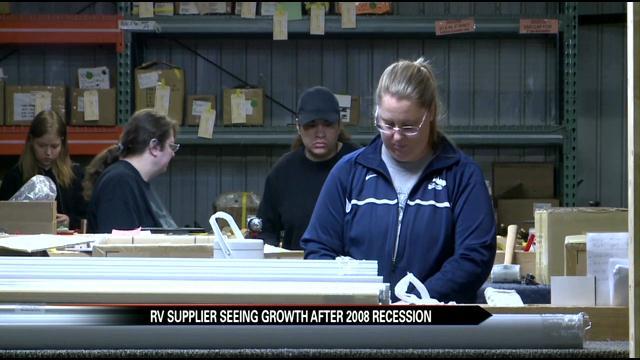 United Shade is a window treatment supplier for the RV industry. The company is under Dicor Corporation and six years after the recession the RV supplier is seeing growth unlike anything it has experienced before.

A loud alarm sounds before a shift change and is reassuring for employees at United Shade.

Not long ago, many in this factory were unemployed.

Keller has a new found appreciation for her busy days. She's worked for Dicor for about a year. Before that she was unemployed.

“Gosh I don't even remember. I just survived. It was bad,” said Keller.

Keller says those days are something she doesn't focus on.

Just like management at Dicor doesn't like to harp on the decline it experienced a few years ago.

“We cut about 20-percent of our employees at the time and not only have we hired that many people back but we are beyond that today,” says Gregg Fore the President of Dicor Corporations.

Fore adds that when the recession hit they had to cut jobs, hours, and salaries, but now they are experiencing resurgence.

Fore doesn't credit President Obama's national stimulus plans for Dicor's growth. Instead he says it happened because of the financial security the community feels.

That feeling is shared by Dicor employee Julie Kocsis. But after her experiences she is cautiously optimistic.

“From what I've been hearing jobs are picking up a little bit but not to the point where things are out of the waters,” says Kocsis.

Fore adds that for the past 18 months it has been challenging to hire the right staff and is searching for more employees.

Current workers say they always feel busy at work, so in terms of job security that is a good feeling.
Share this article: