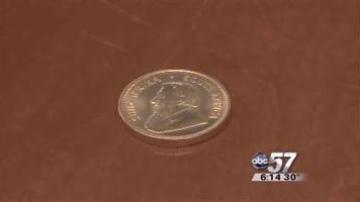 MISHAWAKA, Ind. -- It was a big surprise in a little package!

A gold coin wrapped in a  $100 bill was dropped in a salvation Army kettle on Tuesday. Then, a silver coin was donated on Wednesday.

The gold coin was donated at the Sam's Club in Mishawaka on Thursday morning, but the bell ringer did not see the generous donor.

The Salvation Army said they do not know who the donors are, as they were completely anonymous gifts.

The only clue the Salvation Army was given was a quote wrapped up in the $100 bill and gold coin. The quote read, "There's no improving the future without disturbing the present." It was originally written by Catherine Booth, the wife of the Founder of the Salvation Army.

This is not the first time the Salvation Army received a valuable coin in the Christmas kettles. Last year, they also found a coin wrapped in a quote.

Although they have yet to determine the worth of the coins, Major Best said it will all go toward helping people.

"It's very exciting. We don't know if they are the ones worth a lot or a little bit, but it doesn't matter, after the Christmas season we'll have them looked at and figure it out and that will help us," said Major Best.