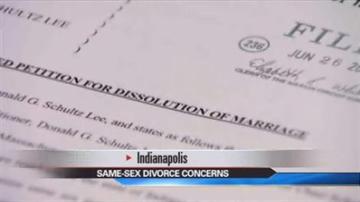 INDIANAPOLIS -- The Supreme Court’s ruling on same-sex marriage is creating murky conditions for Indiana courts when it comes to same-sex divorce.

An Indiana man who got married in Massachusetts is seeking a divorce from his husband.

He cannot get the divorce in Massachusetts because they do not meet the residency requirements.

Now the Marion County Court says it has to accept the divorce petition even though same-sex marriage is illegal here.

"Of course the Supreme Court decision last week is going to create some situations I think all around the state of Indiana that many of us are not used to handling," said Marion County Clerk Beth White.

While it is not clear what implications last week's rulings will have on the case, some attorneys believe same-sex divorce may become legal even in states like Indiana where same sex marriage is banned.