Same sex marriages are now allowed in the Presbyterian church 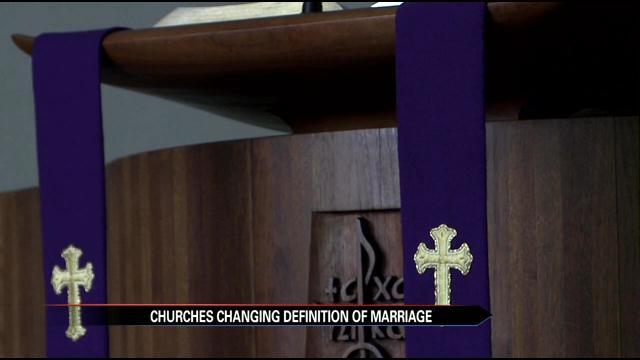 Same sex marriages are now allowed in the Presbyterian church.

Tuesday, the general assembly of Presbyterian Church USA broadened the definition of marriage to include same sex unions.

Local pastors are on both sides of this topic.

Sarah Sanderson-Doughty, the co-pastor with First Presbyterian in Elkhart, is embracing this change.

She does not feel there is one biblical definition of marriage.

The debate is centered on the interpretation of biblical scripture.

Genesis 2:24 states “A man shall leave his father and his mother and be joined to his wife.”

Sanderson-Doughty says there is more to this verse.

"Traditionally for hundreds of years we have had an understanding that marriage is between a man and a woman, but the heart of marriage is a covenant commitment of faithfulness and I believe it is possible to honor that biblical understanding of marriage in a same gender context,' said Sanderson-Doughty.

Other Presbyterian pastors want to stay with the literal text.

"Unquestionable to the biblical definition of a marriage written out fairly literal in the book of genesis and every place else it should be there is nothing that is contradictory of that anywhere in scripture," said Dr. Erik Ohman the senior pastor with Warsaw Evangelical Presbyterian Church.

He says members of his church broke off from the Presbyterian Church USA because they were at odds seeing the denomination leaning in a direction that they were not willing to go.

He says the acceptance of gay marriage seems to fall more in line with current trends rather than the word of God.