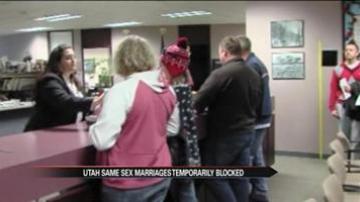 UTAH -- Gay couples were able to get married in Utah for two weeks but as of Tuesday same sex marriages are on hold.

Some want the marriages that already took place to be revoked and while advocates are disappointed they claim the courts are on their side.

Hundreds of gay couples have tied the knot since December 20th when a district court judge said the state's law banning same-sex marriage is unconstitutional.