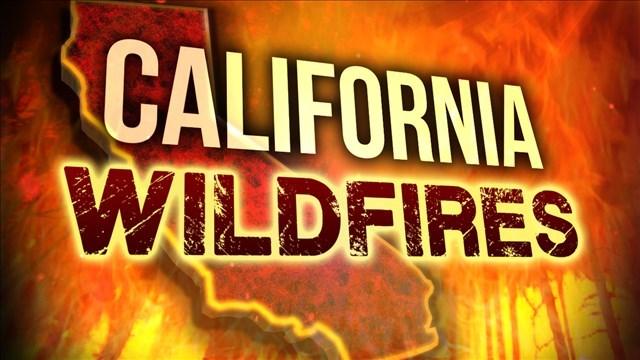 (CNN) -- A wildfire blazing 35 miles north of Los Angeles has grown to 11,000 acres, prompting hundreds of mandatory and voluntary evacuations.

The Sand Fire in Santa Clarita started as a brush fire Friday afternoon and was 10% contained Saturday.

Fighting the fire is a challenge, said Nathan Judy, fire information officer with the Angeles National Forest, because of the rugged terrain and the 10- to 20-mph winds blowing the fire toward the populated part of the county.

"It's hot right now, 85-degree temperatures, and we are looking at getting into the 100s today with no humidity," Judy said. "The fire is burning in multiple different directions. To the east, it is burning more into the forest and uninhabited areas and to the west is our main concern because (the winds) might make it push down to the flat country. That's where we have structures and residents."

Judy said one structure has been destroyed so far, but he had no details on whether it was a home or an outbuilding.

More than 300 firefighters are battling the fire and one firefighter suffered a minor hand injury Friday, Judy said.

Approximately 300 homes are under mandatory and voluntary evacuation orders and shelters have been established for residents and large animals.

"There is a large horse population out here, that's why we have the large animal shelter available," Judy said.

The Santa Clarita area is under a Red Flag Warning.

Meanwhile, the Soberanes Fire near Big Sur has grown to 2,000 acres and also forced evacuations.

Ellen Masten was one of the long-time residents who had to leave.

"The first thing you think is, 'What's important?'" she said. "What should you take, what can't you live without? You look around the house and you say, as much as you love those beautiful plates and those things on the wall, what's really the most valuable thing? I grabbed all the pictures of the kids and then I took the paintings of my parents that had been done by a local artist."

Authorities issued a voluntary evacuation notice Saturday for the Carmel Highlands area. Mandatory evacuations have been ordered for the Palo Colorado neighborhood of Northern Big Sur.

The fire was sparked Friday and is burning 5 miles south of Garrapata State Park. Cal Fire helicopters spent all day flying back and forth between the ocean, where they collected water, and the mountain ridges at the park, where they dropped the water.

CNN's Jackie Castillo and Ralph Ellis contributed to this report.