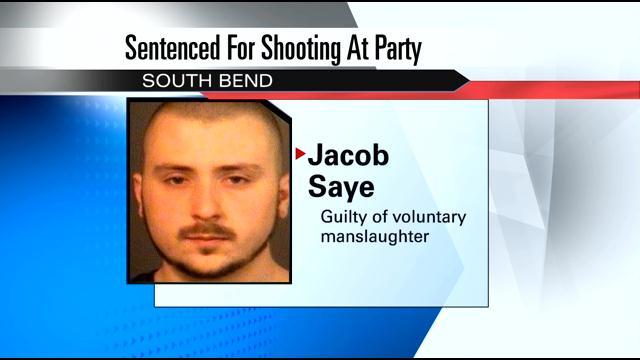 Jacob Saye, the Mishawaka man who pleaded guilty to fatally shooting Christopher White during what he said was a version of Russian roulette was sentenced in a St. Joseph County court Wednesday.

The judge sentenced Saye to 35 years in prison on Wednesday for one count of voluntary manslaughter.

Saye, White and several friends were at a home on South Pulaski Street on February 23, 2014.

Around midnight they went downstairs and White and Saye decided to play beer pong.

Saye told White the winner would be able to use his 9mm semi-automatic gun against the other person in a version of Russian roulette. Saye told police at the end of the game he picked up the gun and pointed it at White's head and pulled the trigger.

In court, Saye's attorney read a statement he wrote.

Saye wrote he was ashamed of what happened and wished he could take it back.

He cried while it was read.

"Whoever Christopher was to become he won't Mr.Saye. You took that," Judge Woodward told Saye. "I don't know that there has been a more cold-blooded killing that's been in front of me."

On the stand, Jacob Saye's father said he believes that his son would benefit from help for his mental illness of bipolar disorder, rather than go to prison.

But the judge disagreed and sentenced him to 35 years in prison.

Christopher's father wishes she could hold his son one more time.

"Hi dad, how are you doing? I just want to hear that from my son, and give him a hug," said Keith White.

He is glad Saye will be in jail.

"It'll help us knowing that he's in there," said Bailey White.

The judge also told Saye, "I hope every day you pray for Christopher White's peace and forgiveness."