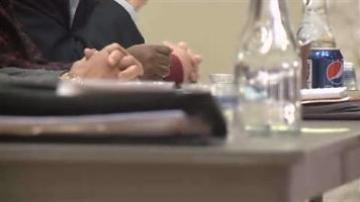 SOUTH BEND, Ind. -- Tension over shadowed the second forum for candidates vying for a seat on the South Bend Community School Corporation board.

Nearly 60 people showed up, with plenty of questions for the candidates.

For the second time, Bill Sniadecki, who is running to keep his third district seat, was one of three candidates who did not participate. Some believe the recent animosity between Sniadecki and school board President Roger Parent is to blame.

During the discussion panel, South Bend school board candidates took questions from the community and many were directed to Parent. "Feelings get hurt, people get upset and people watching us get upset and also think we should somehow always agree," Parent said Tuesday.

Parent was responding to this question: A lot of the proposed changes focus on teachers, students and community members.  What about addressing the negativity on  the school board?

The question was in reference to Sniadecki's comments on September 19th. At the time, Sniadecki made accusations that an executive session of the board was illegal because it discussed the possible closure of three South Bend schools. It's something Sniadecki claims should be a public discussion and voice concerns during the meeting.

Tuesday, Dustin Sanders, an at large board candidate, reacted to Parent's remarks regarding the discord among board members. "there are ways to conduct meetings. I know he stands up there and says he has been strong-fisted with other board members, but yet he does not follow the rules himself," said Sanders.

"It's valuable time we are losing in addressing the issues that really need to be addressed," agreed board candidate Cory Gathright, Sr.

Tonya Hopkins has two kids in the South Bend school system. She hopes electing new members will help restore confidence in the school board. "The policies will be become better. It will give new wine, if you will, for the school board -- new people getting on the school board, with new ideas."

Teachers like 8th grade Math teacher Vernessa Davis disagree, "I don't they have lost confidence in the school board and the school system. I think that everybody is concerned and they want all of our kids in South Bend to do well."

Other hot topics during the forum included how to get parents more involved with the school and teacher diversity. Many parents at the meeting said they want more male, black teachers so that young boys can have more role models in the classroom.