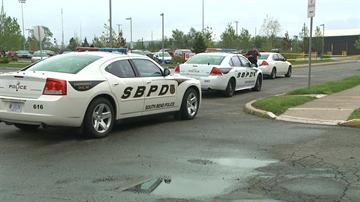 SOUTH BEND, Ind. – Two men were shot at around 7 p.m. outside the Laurel Place Apartment complex on Laurel Street in South Bend.

Police were called to the scene for a report of multiple gunshots.  By the time officers arrived both of the men who were shot had already been taken to the hospital.  Witnesses said the men were working on a car when somebody started shooting at them.

"I was loading my car and I heard it and I ducked," described one witness who only wanted to be known as Tara for safety reasons.  "I thought maybe it was fireworks so I stood back up and that's when I seen the dude with the gun, pointing the gun."

She said the men who were shot ran from the scene to the parking lot of the nearby Kroc Center.

"I heard the guy over here in the Kroc Center parking lot screaming,” Tara described.

For the second day in a row South Bend Police were out scouring the scene of a violent shooting for evidence.  The scene of one of Sunday’s two homicides is just blocks away from the scene of Monday’s shooting.

"It's not good,” said Lt. David Newton of the South Bend Police Department.  “Unfortunately we don't have any control of what the bad guys do, we just try to make it safe for the citizens."

Tara, who lives nearby, said her home has been hit by gunfire and shooting scenes are a common sight.  She explained that she doubted whether anyone was completely out of danger.

“I don’t think anybody’s safe,” Tara described.  “Children over there have to stay in their house, my daughter can't even walk outside and hangout outside where I live."

According to police, both men shot on Monday are in stable condition.