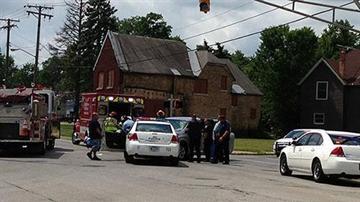 "Basically I was just right across the street on the corner and the lady in the van she had the green light and the officer turned the corner,” said Ray Alexander.

Alexander took an unplanned break from fixing up a building on the corner of Indiana Avenue and SR 23 right after 1 p.m. when he and his boss witnessed the accident.

"No horn, no anything,” said Alexander.

“And I said oh no! Why would it have to be a police officer in an accident?” said witness Samuel Diggins.

They both ran over to see if the police officer and the people in the van were okay.

"The officer just turned right into the van,” said Alexander.

"At approximately 1:05 this afternoon, an officer was responding to a non-injury in the 1900 block of Prairie Avenue when she called out on the radio that she was involved in an injury accident at Indiana and Prairie Street (SR 23),” said Lieutenant Galea.

"Neither one of them were going too fast,” said Alexander.

Alexander says the officer didn't’t have her lights or sirens activated.

"No lights, nothing,” said Alexander.

Lieutenant Galea says that is standard protocol when they are responding to a non-injury accident.

Ironically Diggins said he ended up knowing the women in the van. "In the other car (van) was one of my colleagues ministers wives that was driving."

He said he was there when the fire department and medics arrived. He says they responded to the police officer first and then fire fighters approached the women in the van.

ABC 57 called the fire department to inquire about the incident. Assistant Chief of EMS Andrew Myer said the woman did not think it was necessary to be transported to the hospital at first, but he said they decided to be transported to Memorial Hospital as a precaution.

Lieutenant Galea says it looks like everyone will be fine.

"We have four minor injuries and all four of them are here at the hospital with minor back pain knee and shoulder pain,” said Lieutenant Galea.

Lieutenant Galea says the preliminary findings are that the officer was at fault for turning when the other vehicle had the right of way, but they are still investigating.