Scam Alert: Taking your last dollar; A psychic speaks out! 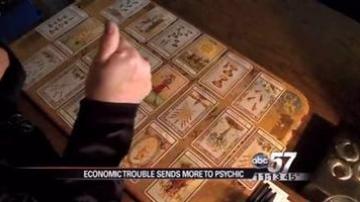 SOUTH BEND, Ind. - You have probably already heard of Barbara the Gray Witch. She is a well known figure in the city with over 45 years experience.

Barbara Roerhrs works out of her home, The Raven House, is on U-93 each week and right now is out at the Niles Haunted House on Friday nights.

Barbara is speaking to ABC 57 News about those in her profession preying on those desperate for answers during these tough economic times, "There is another psychic in town and she will tell you, 'There is a dark cloud hanging over your head. You have been cursed by three witches. You give me $2,000 and I will light candles and pray for you and give you a cleansing.' You can light your own candles and pray for yourself, and you don't need a cleansing, you're fine," Barbara said.

She declined to identify the other psychic out of fear of retaliation but said she is well known by those in the area and in the business.

Barbara said she knew she was psychic as a child and began training as a witch in her teens. She is a certified counselor and even earned a P.h.D. in Theology. She said she has noticed a change in clients and their questions since the economy went bad.

She says that while some psychics may be trying to get rich quick she is in business because she loves people and loves to help them. She said there are weeks she only makes $250-300. Often seeing five to six clients in a week.

"It's enough to pay the mortgage," she said with a laugh.

I asked Barbara what she had to say about her critics, those who think that she too is a scam, "I get that once in while and then I prove them wrong."

She gives advice to those of you thinking about visiting a psychic.

1.) Always ask for the fee up front

2.) Make sure you know how much time you're getting

3.) Be wary of those who won't allow you to tape record the session or bring a friend

4.) Go to the place they live, never call and pay over the phone

Barbara also had some words for me, "You're a care giver. You're very in tune with people. You worry about peoples' feelings. You're sensitive, you get hurt easiest by words. You're a worrier, a 'what if' person, what if this happens, what if that happens. You spend a lot of time worrying about things that haven't even happened yet, so you need to learn to cool it! You probably need a vacation."

Little did Barbara know, I leave for vacation Tuesday morning to celebrate my birthday. It was either a good guess or she really is psychic, I'll let you decide.