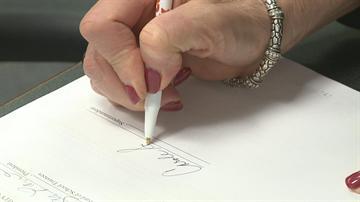 Schmidt officially starts on February 1st and runs for three years until June 2015.

The contract outlines that Schmidt will receive $186,000 a year in salary, a $500 a month car allowance, and a computer for work.
When asked what Schmidt will be doing in the few days before she officially takes on her new title, she said it’ll be business as normal.
"Just what I've been doing, you know. I mean we're working on developing opportunities to save money as you well know. We're working with staff, improving communication and connections with the community and parents,” said Schmidt.
The board unanimously approved Schmidt’s contract on Thursday. Board President Roger Parent said it’s important the school district can stay competitive with its salaries.
"She's worth more than that. We're a $250-million corporation, which $250-million corporation pays its CEO that? You're usually talking a lot of money, so we're just competitive,” said Parent.
Share this article: